Skip to content
Cool Games Featured New Games Online Casino
Roma is an online slot created by MGA that has 5 reels, 3 rows and 15 fixed paylines. Like all the game developer’s slots the RTP is fair, and there’s regular action thanks to multiple bonuses and features.

Though everyone’s heard of Rome, this is not the Roma we are accustomed to today. MGA focuses on ancient Rome, which is evident straight away from the gladiator figure standing before the famous Coliseum. If you visited the site now, you’d find only remnants of the great walls, but in this slot the monument is bustling with activity. Dive into a fascinating period in history and see what it’s like to come to face to face with excitement just like those fighters once did as they stood waiting to win their freedom!

Roman gladiators were often slaves or prisoners seeking freedom through the act of fighting in public, They fought other men or sometimes animals in organized games in large arenas (like the famous Coliseum in Rome) in front of a large crowd. The Roman Empire was said to last between 105 BCE to 404 CE. Gladiators, like the one we see in Roma, traditionally wore steel helmets with crests made from horse hair or feather plumes and used large weapons. Despite all the metalwork to protect their heads, you would often see them flaunting their abs to their rivals!

Rather disappointingly, there’s no menacing soundtrack to continue the sense of exhilaration in the reel part of this game, but the graphics from the buttons are quite authentic-sounding and help rather than hinder the traditional slot game’s performance. 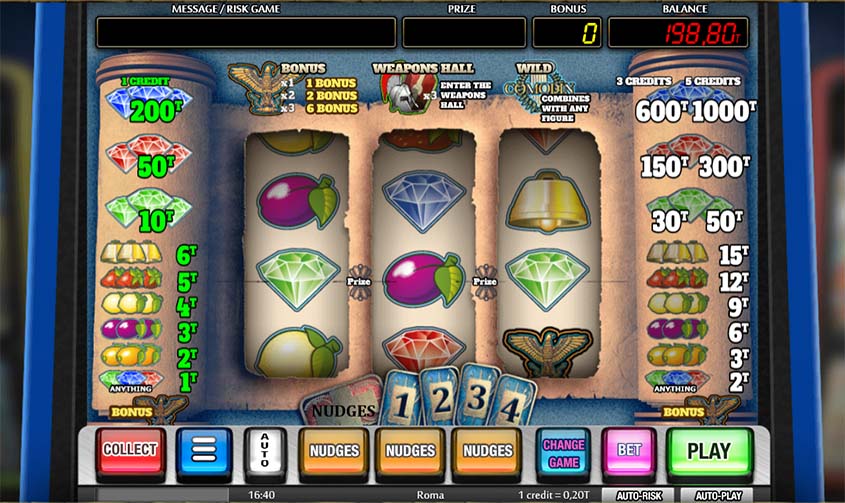 Now we come to the interesting bit. Roma is a double game, with two games played across two screens and two paytables. There’s no part one, part two – you will switch back and forth between the two screens depending on how your individual game and luck goes, only reaching the upper game if you get the right bonuses.

The main reel game is made up of three reels and one payline through them – the position in which you need to land the all-important symbols and trigger prizes and rewards. Each spin has the ability to award a nudge if you are lucky, putting you one step closer to winning.

The main game, mentioned above, is the only place that the gladiator’s helmet symbol will appear in. It is there to enable players to access a mini-game to gain some extra winning credits. There’s also a wild which can substitute for any other icon on the reels. Furthermore, colorful fruit symbols, bells and diamonds appear and are scored dependent on your level.

It is after revealing the upper game that you can also unleash new symbols, including shields, stadiums, chariots and more, plus the classic number 7s which appear in many MGA slot games.

With an interesting approach to gameplay, MGA has kept the bonuses simple with eagle symbols awarding between one and six bonus points. These extra credits can be used in combination with the regular coins from the original game and allow the player a chance to spin the reels in the upper game, which offers five paylines as opposed to the one found in the base game (still set on three reels).

Choose the best casino to play safe and party all your way to the highest hits:

2. Sunclub Casino with its 300% Welcome Bonus up to 1500 €/$/£ or 15.000 Kr. is also a good choice if you prefer playing with a much higher bonus. Deposit now and get triple the amount and triple the opportunity to win big! Don’t hesitate, click here and register NOW!