Red Rake Gaming invites players to take a whirl of its latest spinning slot title with a million ways to win, Million 777 Wheel. 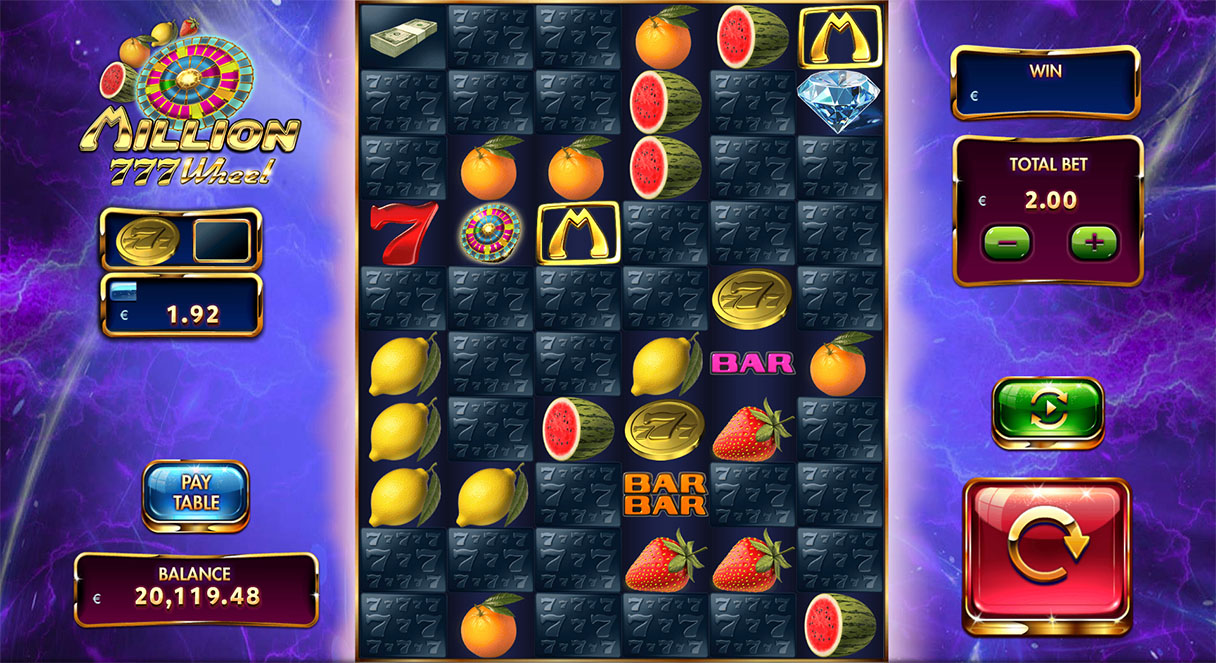 Low value symbols are represented by oranges, lemons, watermelons, strawberries and bells. If the right amount of winning combinations land on a single spin, these symbols can offer between x0.1 and x1 the player’s stake.

Next up, three different variations of a bar symbol depict the medium value symbols, with one, two and three-stacked bars offering between x0.25 and x2 the player’s preferred bet.

Diamonds and lucky sevens are used to represent the high value symbols for this title. These symbols can offer between x0.3 and x20, depending on the amount of paying combinations that fall at once.

Golden wild W symbols are also available, substituting for all aforementioned symbols in the paytable, but for none of the various bonus symbols listed below.

Spinning wheel symbols can drop into play, triggering the 777 wheel feature if three or more land on the reels at once.

Golden 777 coin symbols are included, which are accumulated to a meter at the side of the reels every time they land on the reels. Once this meter becomes full, the 777 minigame feature is activated.

Silver horseshoe scatters can land anywhere on the reels, triggering eight, 12 or 16 free spins if three, four or five scatters land on the same spin respectively.

Additionally, silver M wilds can land on reels two and three, substituting for all paytable symbols and triggering a respin while they stay sticky on the reels. If one lands on both reels on the same spin, this respin will be enhanced by a x2 multiplier.

If golden X symbols land on the reels on a winning spin, the payout will be multiplied by either x2, x3, x5 or x10.

Dollar stack symbols will trigger the money collect feature if three or more land on the reels at once, causing all non-paying blocker symbols to respin and reveal more dollar stacks.

These dollar stacks will have monetary values that are accumulated and awarded to the player at the end of the feature.

Golden luck sevens can also appear, offering between x2 and x200 the player’s stake, depending on the amount of golden sevens that appear on the same spin.

Finally, silver lucky sevens can drop into play, offering between x1 and x100 the player’s stake, depending on the amount of silver sevens that fall on the same go. 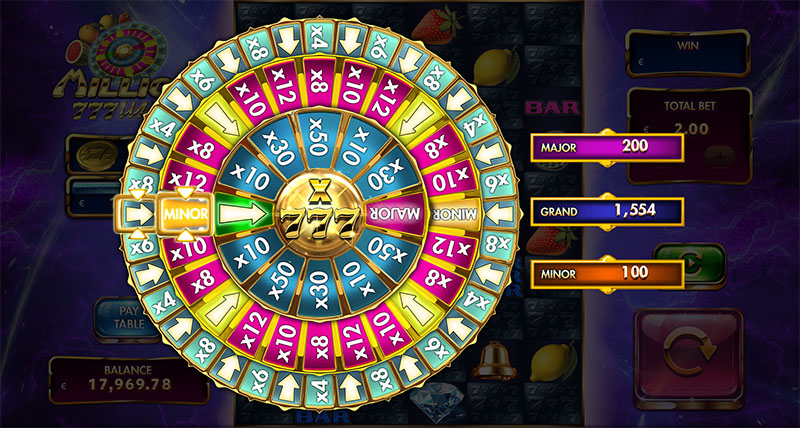 With the 777 wheel feature, players get to spin a wheel that has four tiers. The wheel offers many different multipliers that can be attributed to the player’s bet once the wheel reveals what it has landed on.

During the 777 mini game, players are presented with a 5×3 reel set where only gold coins with monetary values can land on the reels. The feature starts with three fixed coins as players are given three spins to land as many cash values as possible.

Each additional coin that lands in this minigame will reset the number of spins to three. Gold coins can also appear with minor, major or grand jackpot prizes displayed on them. Once all spins have been played out, the sum of all cash value and jackpot coins will be awarded to the player.

In the card mini-game, won through the frenzy feature, players are presented with 16 cards to choose from. Behind these cards are eight different variants of the lucky seven symbols, all corresponding to a different prize value.

Players will select through these cards until they have selected two identical sevens, which will award the player their respective payout.

If players win free spins from the frenzy feature, the spins will guarantee silver sevens to land on the first two reels, with golden sevens and wilds landing on the second reel.