Due to its relative isolation, the Yucatan Peninsula was apparently able to develop a distinct culture up until fairly recent times. Since Yucatan’s Mystery deals in ancient civilisations, we are mainly concerned with the Mayans and the Toltecs of the area. The Mayans are perhaps the more well-known of the two, and imagery such as step pyramids dominate the game.

Set in a dimly lit cavern, or temple, flanked by a couple of unusual totem-like pillars, the action takes place on a 5-reel, 30-payline game area. RTP is ever so slightly down on 95.75%, which is not uncommon from Red Tiger, while volatility rests on a high setting. Not the most inspiring set up to lead with, nor is potential hugely motivating. Yet, the game turned out to be rather playable despite itself.

Playable from 10 p/c to £/€20 per spin, the symbols here are made up of 6 low pay royals, looking like they’ve been dipped in ceremonial paint, followed by 4 premiums. These are a stone carving, a Toltec head sculpture, a blue Mayan mask, and a priest or princess figure. She is by far the most valuable symbol at 25x for five of a kind, compared to 3.5x for the lowly carving.

You might have noticed there was no mention of a wild – in its place are Mystery Coin symbols. These appear regularly in the base game, and during the triggered round of free spins. Whenever Mystery Coins appear on the reels, they spin to display several symbol types. Eventually, they stop to all reveal the same pay symbol. One slight irritation is that they take their time in doing so, even if the resulting symbols don’t lead to a win. You get a bit of a tease; then it’s onto the next spin.

Look out for the step pyramid scatter symbol as three in view award 10 free spins. During free spins a new, ghostly blue 2×2 sized Super Mystery Coin enters the game, floating to a different position on each spin. It is activated when adjacent to any Mystery Coin, where it splits into multiple Mystery Coins to reveal the same common symbol. 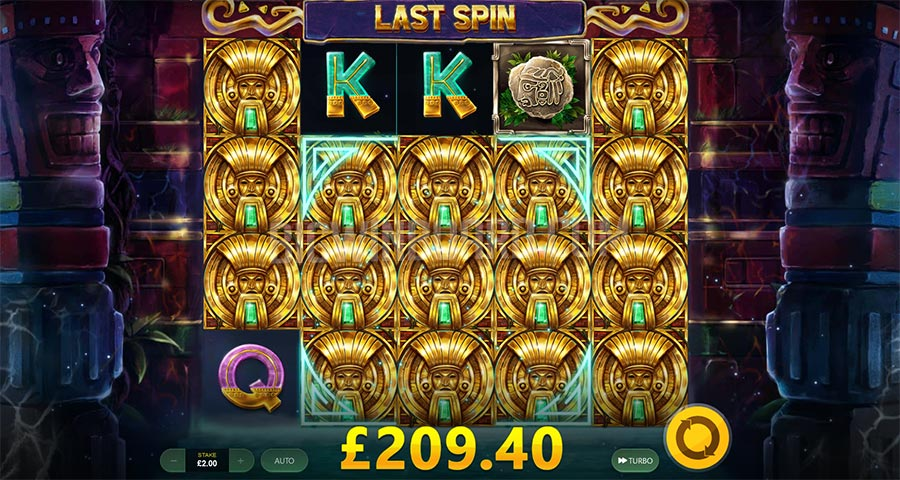 When triggered, the bonus game is quite fun. The roaming Super Mystery Coin is tantalising in the initial 2×2 size, but as it grows in size, so does the thrill factor. Bear in mind Yucatan’s Mystery isn’t a huge paying slot. But if you’re okay with that, then it can be amusing. For the record, the max multiplier of the game is 4,284 times the stake.

In the meantime, the Mystery Coin feature is there to provide a few payouts of its own. Again, another tantalising feature due to the way it spins, teasing with different options, rather than instantly revealing a symbol type. Sometimes it lands your way for a little bump of rejoicing, sometimes it doesn’t, causing a bitter sting of annoyance. Either way, it does help keep you engaged while waiting for free spins.

In many ways, Yucatan’s Mystery is another Red Tiger speciality. An above-average looking slot, boasting below-average figures that are better suited to casuals than connoisseurs. However, if you manage to hack your way into free spins with the right expectations, it can also be quite enjoyable.

Try it out on SuperBigWinner Casino, the casino that we trust!

Lord of Luck the Wheel

New Wild Cash slot for all who like to listen to this crisp sound of new banknotes! A tone of wonderful features, bonus symbols, bonus game, free spins, big wins…

he slot will bring you to the enchanting world of the East! Magnificent lotus flowers, charming music, magic allure of Asian symbolics… Sounds intriguing, doesn’t it? All this you will…

Have you met a charismatic Elvis Frog performing in Las Vegas? We’re sure, you have! The Elvis Frog in Vegas slot, released in May 2020, is a true hit and…

Codex of Fortune – Read between the lines and win big!